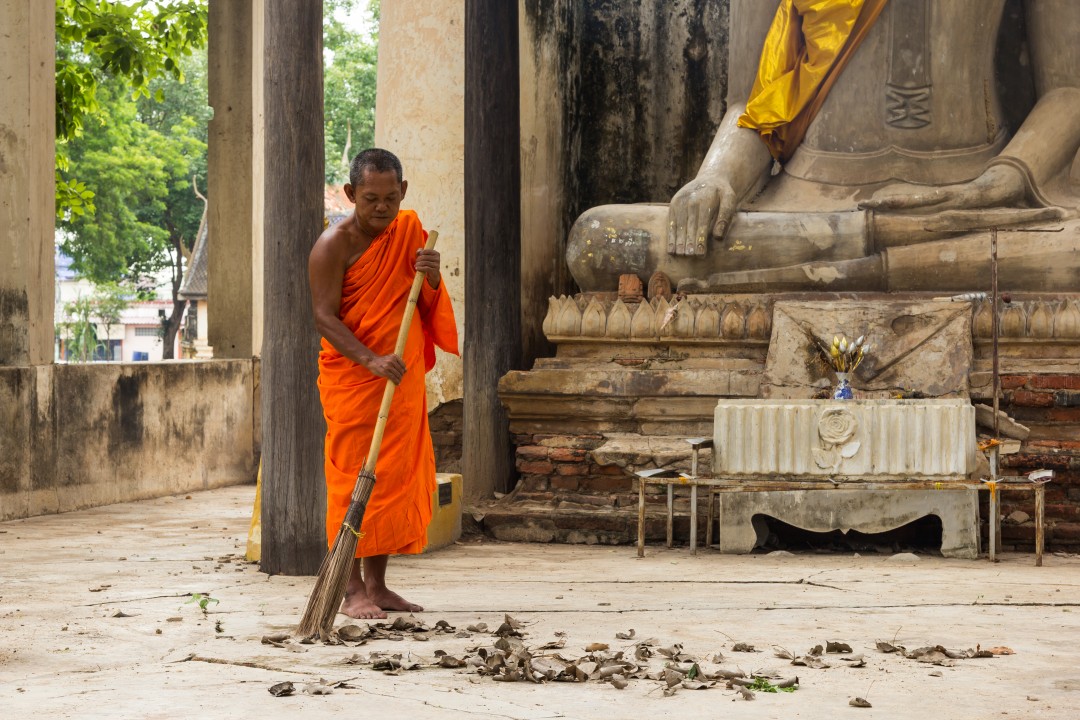 The Buddha is a Factory Labourer

The Buddha is a factory labourer!

It’s true; honestly. It came to me as a revelation half way through my daily run.

The Buddha…is a factory labourer.

Maybe, I don’t think so but … I’ll take my chances.

When my conscious filter is switched off and my internal dialogue a simmering background noise. And when He speaks I listen, and this time when He whispered gently into my heart He told me that The Buddha (or The Holy Prophet, or Jesus, or Lau Tzu, or Krishna, or Guru Granthe Sahib) is pretty good with a brush and a shovel.

I suppose I should explain.

I have a friend.

You know who you are.

I like this friend very much, and I love to chat with him. And of late he has taught me a great lesson (which I will get to).

He is a factory owner/spiritual-aspirant and quite fancies himself as a bit of an all-round altruist. My friend also prides himself on his character because he is in favour with some weighty spiritual gurus and can parley on all things esoteric.

But here is the rub: whilst he is a great lad, his ‘valleys and hills’ are not yet levelled, because whilst his best game is sharp and inspirational, his least game is dull and paltry. He treats those (he feels are) above him like sovereigns, but those that (he feels) are subordinate – his factory labourer for instance – he treats like untouchables.
Why?

But he shouldn’t, because his labourer in the factory is the Buddha.

When my friend is in my company he is regal: generous to a fault, funny, intelligent, gregarious – there is nothing he would not do for me.

But I know that he holds me in high regard, so it pays him to don his best gown. And when this lad is with his guru he is the epitome of grace; grateful, courteous, and complimentary in the extreme.

But his guru is his guru, and you can’t let your mask slip when the master is in the house.

And when he is with customers in his factory he is the sham-servitor extraordinaire. But he is a savvy economist; he has read all the books and knows enough to know that the customer is (always) right, even when he isn’t.

It brings repeat business. But, when it comes to his labourer his best game is lacklustre, his grace is a disgrace and his economics become, well, uneconomical.

Why should he do any better?

What profit is there in respecting the man with the brush and shovel?

His labourer is his guru and his customer.

Actually his labourer is the king, the queen and the common man.

In the bible Jesus says;

Who’s going to notice the ill treatment of one miserly floor sweeper?

Actually, Life notices, Life is The Master of the Scales, and be in no doubt; it keeps score.

And Buddha, well, he passes through this way more often than you might imagine, looking for the humble, the aspirant and the cross-bearer.

And when He arrives (and this is the best bit) it is not announced with trumpet call and lines of hierarchy stood aside the carpet rolled and red.

That would be too obvious.

And in knowing, people would wear their best mask tight, they would doff their posh hat in low-bow, and sparkle with their charity medals lined on lapel. To sort the wheat from chaff, to repel the vainglorious sycophant and draw the genuine servitor He usually prefers to take a more humble disguise (He certainly tends to arrive as someone difficult to like); perhaps the Mighty will come as a whiffy down-and-out with begging fingers and a newspaper bed, or perhaps a dusty peasant riding into town on a donkey, or, if he really wants to be incognito, he might disguise himself as something startlingly routine like, oh, I don’t know….a factory labourer, with shovel and broom perhaps?

I would add to this;