Being a vegetarian (no preaching…promise!)

It has been almost a year since I stopped eating meat or fish and started ‘being a vegetarian’. In all honestly it seems crazy to me now that I ever ate it. Eating this way seems so natural to me now that it feels like I have never eaten meat at all.

Giving up meat wasn’t a sudden decision for me.

It was something that built slowly, something I thought about a lot before I actually did it. Even when I finally made the decision to give vegetarianism a try, I did so somewhat reluctantly, and was not convinced that it would be sustainable for me.

I decided that on New Years Day (of course) I’d cut down on my meat consumption and just see where it went; let it happen organically… or not. Initially I thought that I’d just give up meat and maybe still have a little fish (God knows why. I didn’t even really like fish. I think I just wanted to hold on to something). As it turns out, I haven’t touched meat or fish since that very first day.

I shouldn’t be surprised that I became a vegetarian because, well, I never really liked meat. Actually that’s not quite true, I liked the taste of meat and if it was disguised within a meal, I could eat it quite happily. What I didn’t like was the thought that I was eating dead flesh. Anything that even slightly resembled an actual animal or fish, any little bit of gristle or a bone in my mouth and my stomach would turn and I couldn’t eat it. I ate my steak so cremated that chefs didn’t like to cook it for me because (in their view) I was ruining it. If there was one tiny bit of pink it would go back. I couldn’t even watch somebody else eat a raw steak, mopping up the “juice”…juice that was quite clearly blood. Ergh.

I hated handling meat; cooking it and the majority of the time I didn’t enjoy eating it. Looking back now, it seems obvious that the life of a vegetarian was for me but having been brought up in a working class, meat and two veg eating family, I didn’t really know any different. I did give up meat in my twenties, in a very “I’ll eat lots of meat substitutes” way, but because the soya products didn’t sit well with my body and I knew they were not the healthiest of choices it wasn’t sustainable for me. One day, after around a year, I fancied a steak (cremated of course) and I was back on the meat wagon (so to speak).

I think that’s why I was so reluctant to try again. I don’t enjoy typical vegetarian fare; stuffed peppers, baked mushrooms etc. – they’re just not my thing at all.

This time around though, almost ten years later, things have changed. There has been a shift in the way people are thinking about and eating food and there is a lot more choice on the food market. Vegan, vegetarian, gluten free, lactose intolerant, refined sugar free, all of the above – everybody is catered for and eating out is a lot easier than before.

Then there’s the rise of the healthy food bloggers. These people are celebrities in their own rights, just from talking about eating healthy and showing us pictures of their breakfast. Deliciously Ella, Joe Wick’s Lean in 15, Mind Body Bowl, The Detox Kitchen; all cooking delicious healthy food, often without any meat at all. A number of these have lead to book deals and seen them for weeks in the bestseller lists. Even Jamie Oliver, who’s meals I find have always been very meat orientated, has now recommended eating a more plant based diet and only eating meat a couple of times a week.

I can honestly say that I have never been short of ideas for meals to make (which often times I can add meat to for the rest of my family). I have enjoyed everything I have eaten and I have not missed meat even once. My diet has also never been so varied.

It honestly feels like a relief to me that I don’t have to eat meat anymore. While I have never enjoyed eating meat, the older and more knowledgeable I get, the more I understand that not eating meat is the right thing for me from many perspectives; morally, environmentally and spiritually.

That said, I only know that this is the right thing for me. I feel no judgement whatsoever toward other people who do enjoy eating meat and I feel no calling to preach my message to the masses. My husband is very old school and a meal without meat is just not comprehendible to him. I know his views on this will never change and I respect that. Similarly my five-year-old daughter still eats meat and while I hope she will be influenced by my decision not to be a meat-eater, if she isn’t, that is fine also.

I have noticed that some people either feel uncomfortable eating meat in front of me or make a big show of telling me how they’d “have to have meat with that”. There is no need though, like I said, I feel no need to try to convert anybody or even reveal the benefits (did I mention I have lost close to one stone in weight). I’m just so glad that I finally found the courage to make the decision to give it a try. I know without a shadow of a doubt that it is the right thing for me and that I will never eat meat again. 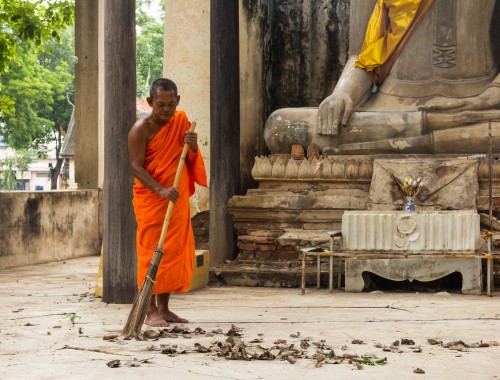 The Buddha is a Factory Labourer